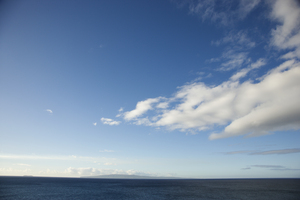 One morning as I was on my way home from dropping my son off at school, I found myself looking up at the sky. It was so expansive that I could not see where it began or where it ended. Right then, I started thinking about God, the Creator of the sky, the universe, all that lies behind the scenes, and me. If the sky was so vast, how much more must the Creator be! I was seeing this as if for the first time and He was beginning to blow my mind.

Shortly after this, on the way home from dropping my son at school another day, (clearly dropping my son to school leads to spiritual revelations!) I was on my way back home and stopped at a traffic light. This day was overcast and the entire sky was grey. I started talking to God and asking Him, “How do you do that? You color the whole sky grey! You’re unbelievable!” Shortly after that, I noticed the clouds were moving really fast and I began to wonder if God’s mere breathing had caused the clouds to move. I looked over at the guy in the car next to me and he was on his cell phone. How could he be on his phone at a time like this? Was he seeing what I was seeing? Why wasn’t he as blown away as I was? I realized then that we all just take for granted the daily myriad of marvels of our supreme God.

How about you? Are you amazed by the One who turns the sky grey and who moves the clouds really fast? Or are you like the guy in the car next to me (and me most days), unmoved? If we could only let His magnificence and enormity sink in a little bit. Yet, to the extent that God is huge and all-powerful, He is also present everywhere, all-knowing, and all loving. He loves each one of us as if we are only children and has an amazing plan for each of our lives. Jeremiah 29:11 says His plan is to enrich our lives, not hurt us, to give us a hope and an amazing future. He has a plan. In the midst of this chaotic world and our often chaotic lives, I’m really glad that someone does! And I would definitely pick Him to be in-charge of it for sure.